Our mission is to preserve and restore historical buildings and landmarks. The company follows the principles adopted by the Society for the Protection of Ancient Buildings (SPAB) which are:

Repair not Restore: Although no building can withstand decay, neglect and depredation entirely, neither can aesthetic judgment nor archaeological proof justify the reproduction of worn or missing parts. Only as a practical expedient on a small scale can a case for restoration be argued.

Responsible methods: A repair done today should not preclude treatment tomorrow, nor should it result in further loss of fabric.

Complement not parody: New work should express modern needs in a modern language. These are the only terms in which new can relate to old in a way which is positive and responsive at the same time. If an addition proves essential, it should not be made to out-do or out-last the original.

Regular maintenance: This is the most practical and economic form of preservation.

Information: To repair old buildings well, they must be understood. Appreciation of a building’s particular architectural qualities and a study of its construction, use and social development are all enlightening. These factors also help us to see why decay sets in and how it may be put right.

Essential work: The only work which is unquestionably necessary (whether it be repair, renewal or addition) is that essential to a building’s survival.

Integrity: As good buildings age, the bond with their sites strengthens. A beautiful, interesting or simply ancient building still belongs where it stands however corrupted that place may have become. Use and adaptation of buildings leave their marks and these, in time, we also see as aspects of the building’s integrity. This is why the Society will not condone the moving or gutting of buildings or their reduction to mere facades. Repairs carried out in place, rather than on elements dismantled and moved to the work-bench, help retain these qualities of veracity and continuity.

Fit new to old: When repairs are made, new material should always be fitted to the old and not the old adapted to accept the new. In this way more ancient fabric will survive.

Workmanship: Why try to hide good repairs? Careful, considered workmanship does justice to fine buildings, leaving the most durable and useful record of what has been done. On the other hand, work concealed deliberately or artificially aged, even with the best intentions, is bound to mislead.

Materials: The use of architectural features from elsewhere confuses the understanding and appreciation of a building, even making the untouched parts seem spurious. Trade in salvaged building materials encourages the destruction of old buildings, whereas demand for the same materials new helps keep them in production. The use of different but compatible materials can be an honest alternative.

Respect for age: Bulging, bowing, sagging and leaning are signs of age which deserve respect. Good repair will not officiously iron them out, smarten them or hide the imperfections. Age can confer a beauty of its own. These are qualities to care for, not blemishes to be eradicated.

See our representative projects below: 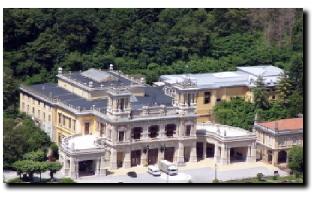 During the ‘Belle Epoque’ of the late 1800s and early 1900s San Pellegrino Terme was engulfed in elegance and splendour attracting royalty, diplomats and celebrities as a result of its mineral springs, the quality of its sub-Alpine setting and its extraordinary art nouveau, seven story Grand Hotel and, on the opposite side of the Brembo River, the magnificent Casino. 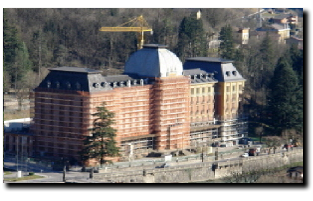 This traditional wellness resort, located some 20 km north of the historic city of Bergamo and 80 km north of Milan, in the Lombardy Region of northern Italy, straddles the Brembo River at the heart of the Brembana Valley, the gateway to the Bergamo Alps and the peaks of the Castello Delta Regina and Zucco Mountains. The therapeutic properties of the mineral spring waters of San Pellegrino were well known in the Middle Ages. They were referred to by Leonardo da Vinci as being “miraculous”.

Recently plans have been announced by the Lombardy-based property company, the Percassi Group to recreate the Belle Epoque for San Pellegrino Terme. This is an extraordinary and ambitious regeneration scheme involving, as its centrepiece, a new spa complex designed by French architect, Dominique Perrault. 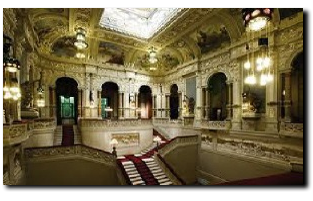 The intriguing plans for San Pellegrino Terme are designed to completely re-energize and regenerate this remarkable, historic center of wellness and spa tourism. The €140 million concept aims to ‘create a place within a place’, harnessing the San Pellegrino inherent brand awareness and its traditions to recreate an exclusive, high-value tourism destination.

The plans are intended to be a catalyst for the development of year-round tourism across this Region; this will build upon the winter snow sports of Val Brembana (especially Foppolo) and the cultural tourism interest of Bergamo Alta to develop high value tourism for the Valley. 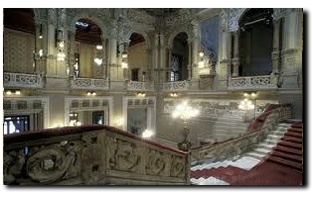 Architect Dominique Perrault was selected from an international architectural competition to realize the vision for the new San Pellegrino Terme complex that will complement the refurbishment of the Casino and the Grand Hotel to create a luxury seven-star destination.
He states, “This project, when complete, will generate some 30,000 overnight stays a year and will support an estimated 2,500 jobs throughout the Valley. It will stimulate international awareness and interest but expectations will be heightened and we have to deliver quality visitor experiences as a community not just in the spa complex”.

For this reason the Percassi Group’s plans for a Hotel School to be located in the City Centre is fundamentally important to the long-term success of this scheme. It is an important component that demonstrates the potential of this investment for local people.

This is genuinely a project of European status and significance. The brand significance and global knowledge of the San Pellegrino brand of mineral waters creates an unrivaled platform for place promotion and this type of investment in wellness tourism. It is one of a number of major property development projects by the Percassi Group with a total investment in excess of €600 million but it is undoubtedly the most significant from a tourism perspective. The economic recession has slowed down the pace of the fulfillment of the San Pellegrino project, but has failed to knock it off course.

The vision of this project is founded in a rich tradition and culture of wellness and luxury tourism. The team working on the project and working hard to secure its maximum benefits for the Valley Brembana is passionate, skilled and determined. It is a scheme that, if fully integrated with a strong collective effort to achieve a coordinated approach to destination development, can re-establish San Pellegrino Terme and the entire sub-region of the Brembana Valley and Bergamo as a major European wellness destination.

From the eleventh to the thirteenth century, European soldiers led by professional officers, fought against the Muslims in the Crusades (1095–1291). These crusading officers provided large-scale warfare combat experience in the foreign Holy Land of the Asian Middle East. On the Crusades’ conclusion, the first masnada (bands of roving soldiers) appeared in Italy. 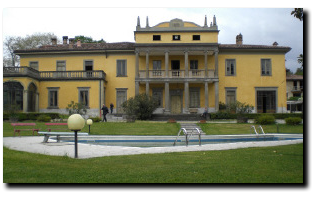 These masnada were not Italian, but (mostly) German, from the Duchy of Brabant (hence, Brabanzoni), and from Catalonia and Aragon. The latter were Spanish soldiers who had followed King Peter III of Aragon in Italy in October 1282, and, post-war, remained there, seeking military employment.

Far removed from those turbulent times, the 18th century villa is now an exclusive residential community built in the area of the Parco dei Colli di Bergamo with the original villa and vineyards serving as the centerpiece. The underground car park enables the rural charm and character of the estate to be preserved.

The complex of Villa Masnada provides a closed-loop geothermal system with vertical and horizontal probes integrated with an open circuit with well water, groundwater, and the prestigious residential complex Villa Masnada is now a hub of sustainability in the province of Bergamo. The complex is built in the area of the Parco dei Colli di Bergamo, Italy and has achieved awards from the International Geothermal Association for its provision of hot water, heating and cooling to its 26 homes. 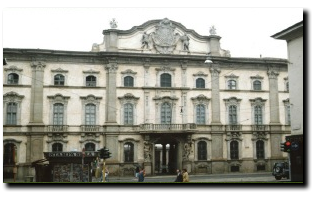 The construction of the Palazzo Litta started in 1648 for the president of the Senate of Milan but Duke Litta Visconti Arese purchased later. The facade built by Bortolomeo Bolla still preserves its original form even though it was built over two centuries ago. An astonishing aspect that most visitors come across while they pay a visit to Palazzo Litta is the multitude of the strange masks on the facade.

The remarkable stairway with three ramps designed by Carlo Giuseppe Merlo in 1740 is true delight for the eyes. This beautiful palazzo also accommodates various beautiful rooms and a marvelous courtyard. This palazzo served as the head office of a private rail company in 1873 but presently it is management office for the Italian State Railways, Ferrovie Dello Stato.